The Chelsea bun is a type of currant bun that was first created in the 18th century at the Bun House in Chelsea and although traditionally made with currants, I am using sultanas as they tend to add a bit more moisture to the bun.  The toasted pecans have a nice crunch. 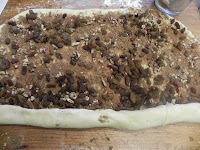 Sift the flour and salt into a large bowl. Make a well in the middle and add the yeast.

Meanwhile, warm the milk and butter in a saucepan until the butter melts and the mixture is lukewarm. 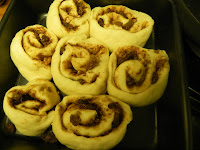 Add the milk mixture and egg to the flour mixture and stir until the contents of the bowl come together as a soft dough. (You may need to add a little extra flour.)

Tip the dough onto a generously floured work surface. Knead for five minutes, adding more flour if necessary, until the dough is smooth and elastic and no longer feels sticky.

Lightly oil a bowl with a little of the vegetable oil. Place the dough into the bowl and turn until it is covered in the oil. Cover the bowl with cling film and set aside in a warm place for one hour, or until the dough has doubled in size.

For the filling, knock the dough back to its original size and turn out onto a lightly floured work surface. Roll the dough out into a rectangle ¼" thick. Brush all over with the melted butter, then sprinkle over the brown sugar, cinnamon, nuts and dried fruit.

Roll the dough up into a tight cylinder , cut ten 1½" slices and place them onto a lightly greased baking sheet, leaving a little space between each slice. Cover with a tea towel and set aside to rise for 30 minutes.  (I also put a few in a cake tin to make a round of buns).

Bake the buns in the oven for 20-25 minutes, or until risen and golden-brown.

Meanwhile, for the glaze, heat the milk and sugar in a saucepan until boiling. Reduce the heat and simmer for 2-3 minutes.

Remove the buns from the oven and brush with the glaze, then set aside to cool on a wire rack.
at October 26, 2011 No comments: 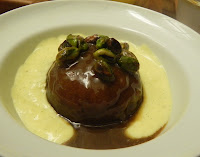 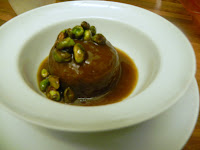 To serve, turn the puddings out and pour over the toffee sauce then sprinkle pistachios over each pudding.  Pour over cream or custard.
at October 24, 2011 No comments:

Chicken and Bacon Terrine with Basil and Peppers 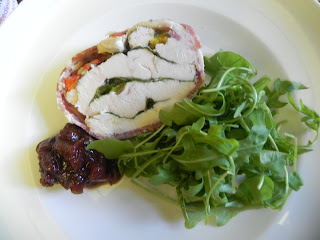 Take a knife along the strips of bacon to stretch them, then line a terrine or loaf tin with overlapping strips.

Pack with alternate layers of chicken and basil, finish off with a layer of peppers and a drizzle of olive oil. Season each layer with salt and pepper.

Fold the bacon over the top of the terrine and bake on the middle shelf of the oven for 1 hour. 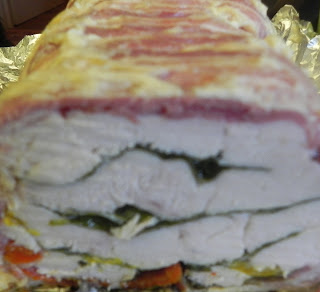 Remove from the oven and cool completely in the tin before transferring it to the fridge.  Refigerate overnight.

To serve cut into slices and serve with some rocket leaves and a good chutney. (see my recipe for plum and ginger chutney posted 19 September).
at October 19, 2011 No comments:

I love meatloaf, the fact that you can eat it hot with mashed potato and cabbage, cold with salad, and best of all for me, sandwiches, especially sandwiches with crispy salad and home-made mayonnaise. 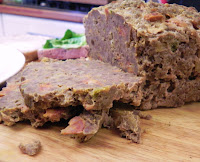 The addition of very finely chopped Chorizo makes it very special but remember to drain off any excess oil from the chorizo, when you remove the meatloaf from the oven.

Place all the ingredients in a large bowl and mix together thoroughly.

Press the mixture into a 2lb loaf tin and cook in the middle of the oven for 1 hour.

Remove from the oven and drain off any excess oil.

To serve hot leave in the tin for 5 minutes before cutting.

To serve cold cool completely on a wire rack then wrap in clingfilm.
at October 12, 2011 No comments:

These buttermilk scones are very light and delicious.  Eat them warm with buttter or for breakfast with bacon and poached egg.  The cayenne pepper and mustard powder gives them a slight heat and the flavour of celery salt is just in the background.  I used around 1 tbsp of chopped chives but you can use less or more depending how strong you want the flavour.
Ingredients
6 oz self-raising flour
1 tsp mustard powder 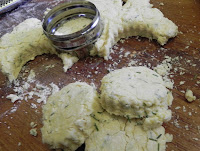 1/4 tsp cayenne pepper
1/2 level tsp celery salt
finely chopped chives
1 oz butter
3 oz mature cheddar cheese, finely grated
2 1/2 tbsp buttermilk
1 egg
Pre-heat the oven to 220C
Sift together the flour, mustard powder, celery salt and rub in the butter.
Add the cheese (save some for the topping) and chives and mix gently.
Beat together the egg and buttermilk then add to the flour mix.  Stir with a knife to form a dough and turn onto a lightly floured surface.  Handle the dough as little as possible.
Roll out or pat down the dough to a thickness of 1" then cut into 2" rounds.

Place the rounds on a baking tray and brush with buttermilk then top each one with a little of the grated cheddar cheese.
Bake on the top shelf of the oven for 10-15 minutes until golden.
Serve warm or cold and store in an airtight container for up to 3 days.
at October 07, 2011 No comments:

Ingredients
225g S R flour
225g caster sugar
225g butter, softened
4 eggs
Finely grated zest of 1 lemon
75g sultanas, soaked for 1 hour in 3 tbsp medium dry sherry
For the icing
85g caster sugar
1 1/2 lemons, juice only
Pre-heat the oven to 180C / gas 4
Beat together the caster sugar and butter until pale and fluffy then add the eggs 1 at a time, mixing slowly.
Sift in the flour and stir in the lemon zest and sultanas.
Line a loaf tin (8 x 21cm ) with greaseproof paper, spoon in the mixture and flatten the top with the back of the spoon.
Bake for 45-55 minutes until a skewer inserted in the middle comes out clean.  Cool the cake in it's tin.
Mix the icing ingredients together and prick the top of the cake all over with a cocktail stick then pour the icing over the top.  The juice will sink in and you will be left with a crunchy topping.
When the cake has cooled completely remove it from the tin and store in an airtight container until ready to serve.
at October 05, 2011 No comments: