Seasonal Food of the Week 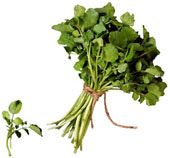 Spring is in the air and watercress is in season, what better time to fill up on all those vitamins and minerals found in watercress.


Watercress is brimming with over 15 vitamins and minerals, gram for gram containing more vitamin C than oranges, more calcium than milk and more iron than spinach.


It is also a fantastic salad leaf. Its plump, vibrant leaves  taste wonderfully peppery  and is delicious when mixed into a light salad, sizzling stir fry and wholesome soup.


Try these recipes for a light lunch of watercress soup or a tasty dinner of Char grilled tuna with a delicious watercress Salsa Verde.


In a large pan, cook the onion in the oil until soft.
Add the potatoes and stock and cook until the potatoes are soft (approx 15-20 minutes). When potatoes are almost cooked, add the watercress (try to allow not longer than 5 minutes cooking time for the watercress). Liquidise, add the crème fraiche. Use a little extra milk if the soup seems too thick. Season with salt and black pepper and serve hot.
Char Grilled Tuna with Salsa Verde
4 (100g) fresh tuna steaks
2 tbsp lemon juice
½ tsp ground Szechuan pepper
1 tsp olive oil

1 (85g) bag watercress
2 tbsp fresh basil leaves
1 clove garlic
2 tbsp lemon juice
2 tsp olive oil
Place the tuna steaks on a plate, mix together the lemon juice, pepper and oil and pour over the fish. Cover and leave to marinate in the fridge for 30 minutes, turning once.
To make the salsa verde, place all the ingredients in a food processor or blender with 2tbsp cold water and blend to form a smooth paste. Season to taste.
Heat a large griddle pan and when hot add the tuna steaks. Cook for 5-6 minutes, turning once until the fish is char grilled on both sides but still a little pink in the middle. Sit a spoonful of the chopped tomato and capers on top when you have turned the tuna, there should be enough heat to warm it through during the remainder of the cooking time.   Serve with the salsa verde and a salad.
at April 07, 2010