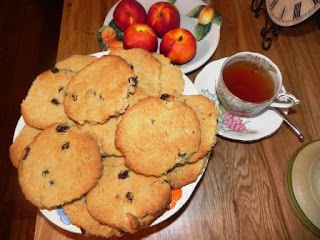 This recipe, adapted from an old Orcadian cookbook, is a definite winner when it comes to home baked biscuits.  The original recipe calls for beremeal but as it doesn't seem to be readily available you can replace it with oatbran.  Also great flavoured with cinnamon or ground ginger, just add 1+ 1/2 tsp of either spice with the flour. 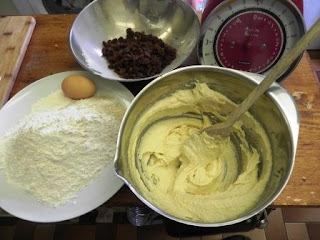 Cream together the butter and sugar.

Sieve in the flour then add the oatbran, sultanas, egg and salt.  Mix well.

Turn out onto a floured surface and knead into a dough, roll out to 1/8" and cut into 3" rounds.

Line a baking tray with greaseproof paper and bake the biscuits on the top shelf of the oven for 14-16 minutes until light golden brown. 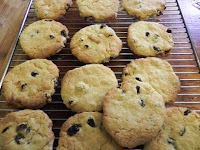 Carefully transfer the biscuits to a cooling rack, use a fish lifter for this as they will still be soft, they become crisp as they cool.

A bit about beremeal (supplied by wikipedia)

Bere, pronounced "bear," is a six-row barley currently cultivated mainly on 5-15 hectares of land in Orkney, Scotland. It is also grown on Shetland, Caithness and on a very small scale by a few crofters on some of the Western Isles.   It is probably the British Isles' oldest cereal in continuous commercial cultivation.

Whisky, beer and biscuits have been developed for Orkney Bere. The crop is also being grown on the island of Islay, for whisky production.
at June 08, 2011