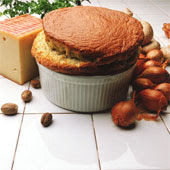 Souffles are easy to make as long as a few rules are followed. To produce a hot souffle, egg whites are stiffly whisked and folded into a thick flavoured sauce then cooked in a straight sided dish. The consistency of the sauce is crucial. It must be soft enough so the whisked eggs can be folded into it. If it is too thick the souffle will not rise properly. If it is too thin, it will knock the air out of the whisked egg whites and it will not rise properly. Under or over whisking the egg whites will also result in a poorly risen souffle. Follow the instructions below for a delicious cheese souffle.

Put the milk, onion, carrot, celery, bay leaf and pepper corns in a small saucepan and bring slowly to the boil. Remove from the heat , cover and set aside to infuse for around 30 minutes. Strain, reserving the milk.
Brush a 1.4 litre souffle dish all over with melted butter, taking it right up to the top, and sprinkle the Parmesan cheese over the base and sides of the dish.
Pre-heat the oven to 180C 350F gas mark 4. Melt the butter in a saucepan, stir in the flour and cook gently for a minute or two, stirring continuously. Remove the pan from the heat and stir in the milk.
Return the pan to the heat and bring slowly to the boil, stirring continuously. Continue to cook the sauce for 5 minutes, until it thickens, then lower the heat, stir briefly and simmer the sauce gently for around 10 minutes.
Remove the pan from the heat and allow to cool slightly. Beat the eggs, mustard, egg yolks, cheddar cheese and the seasoning into the sauce, reserving a tablespoon of the cheese.
In a large bowl, whisk the egg whites until they form stiff peaks. Fold 2 tablespoons of the whisked egg whites into the cheese sauce, then carefully fold in the remaining whisked egg whites, using a cutting and folding action. Be careful not to over mix, but make sure there are no visible flecks of egg white.
Gently pour the souffle mixture into the prepared dish. Using a table or palette knife, pierce the surface of the souffle 1in in from the edge of the dish and carefully move the knife in a circle around the edge of the mixture to release any trapped air bubbles and ensure that the souffle rises evenly.
Sprinkle the reserved cheese over the top of the souffle and bake for around 30 minutes until well risen, golden brown and firm to the touch.

Do not open the oven door to check on the souffle for at least 25 minutes. Serve immediately.

Add 1-2 tbsp of chopped fresh mixed herbs with the cheese or use Stilton instead of the Cheddar.
at December 16, 2009