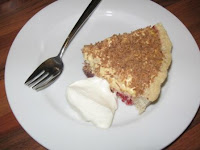 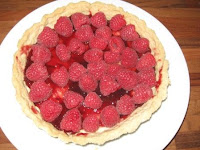 This has got to be one of the loveliest desserts, the pastry is very short and biscuit like and the custard is very luxurious and creamy.  The tang of the fresh raspberries and the topping of toasted coconut make it very special.

Rub the fats into the flour until the mixture resembles breadcrumbs.  Add cold water 1 tsp at a time until a dough is formed.  Rest the dough in the fridge for 30 minutes.

Roll out the pastry on a floured surface, line a 20cm flan tin and prick the base all over with a fork.  Bake in the oven for 15-20 minutes then leave to cool.

In a large bowl whisk the sugar and egg yolks until pale and fluffy.

Return the mixture to the pan, gradually add the cornflour, 1 tsp at a time, stirring continuously, until the mixture thickens and coats the back of the spoon.

Transfer to a bowl to cool.  Sprinkle with icing sugar (to prevent a skin forming) and chill in the fridge for 30 minutes. 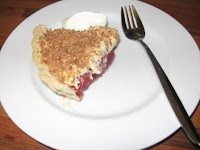 Fold the whipped cream into the chilled custard until well combined and spoon this mixture over the raspberries.  Top with toasted coconut and refrigerate until serving.
at September 07, 2010