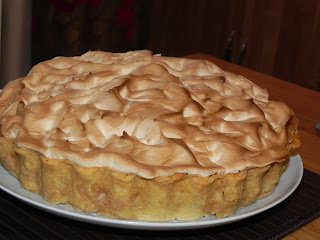 Rhubarb is abundant in my garden at the moment, so jam, chutney, sauces, crumbles and pies aside I am always looking for new recipes.  This is adapted from one of Delia's recipes and as always with Delia, it's delicious, the rhubarb is still tangy and the zesty orange flavour goes so well with it.
For the pastry 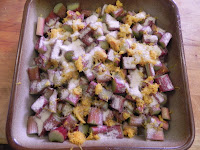 Rub the fats into the flour then add a little cold water to form a firm dough.  Rest the dough in the fridge after covering with cling film. 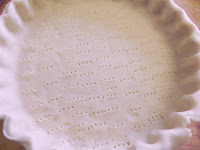 Roll the pastry out on a lightly floured surface and line a 22cm flan tin, prick the base of the pastry all over with a fork.

place the rhubarb in an ovenproof dish, sprinkle with the orange zest then the sugar.  Place the orange juice in a small saucepan.

Bake the pastry case for 25 minutes on the top shelf of the oven until mid-brown.  At the same time, cook the rhubarb on the bottom shelf until tender (around 25-30 minutes)  Remove both from the oven and set aside.


Mix the cornflour to a paste with a little of the orange juice and warm the rest until almost simmering.  Remove from the heat and whisk into the cornflour paste, return to the pan and heat until very thick, whisking continuously.  Strain the rhubarb juice into a jug and stir in the ginger syrup, add to the cornflour mixture along with the egg yolks, beat together then fold into the rhubarb.
For the meringue 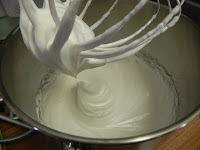 Beat the egg whites with an electric mixer until they form soft peaks, add the sugar 1 tbsp at a time beating between each addition until stiff and glossy. 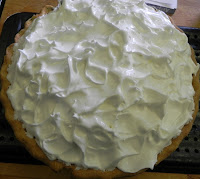 Spoon the rhubarb mixture into the pastry case, cover with the meringue mix making sure the edges are sealed, then place in the oven until the meringue is golden brown.

Leave to cool for a couple of hours then serve with whipped cream.